This volume had... unusually many typos in character names, when usually the amount is zero. 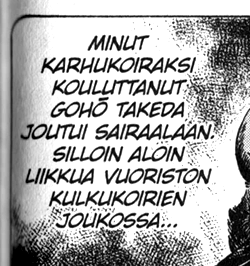 "Gohō Takeda, who trained me as a bearhound, was hospitalized. That's when I joined the stray dogs of the mountains..." 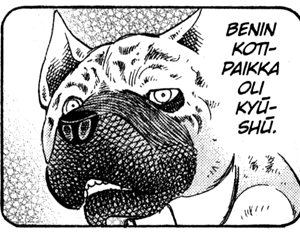 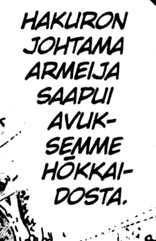 "An army led by Hakuro came to our aid from Hōkkaido.", when it should be "Hakurō" and "Hokkaidō".

On the very next page, Hakurou's name is spelled correctly again. 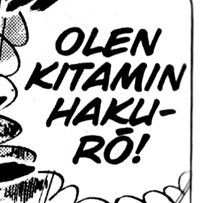 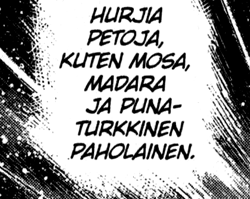 "[They were] Fierce beasts, like Mosa, Madara, and the Red-furred Devil."

This isn't necessarily incorrect, but again, it is inconsistent with previous Finnish translations.

YIKES on so many wrongs!
Wait for me; Terrex, Baghéera, Nokorde, Smulan, when its my time I come I don't mostly like the word choises this new translator uses, but Gohee shouting "Perkele!" is so damn fitting!

Best manga at the moment: Moriarty the Patriot

My Ginga (and other) collections:
DeviantArt - GingaMerch - Instagram - Tumblr

methpring wrote: ↑Tue Oct 11, 2022 10:27 am I don't mostly like the word choises this new translator uses, but Gohee shouting "Perkele!" is so damn fitting!

Agreed! If there ever was a character in Ginga who would use that word, it would be him.

And I also don't like the word choices Taavi Suhonen uses in his translations. I know in Japanese swearing is very mild compared to some other languages, but also after +10 years of having the "damn/darn/shoot" level of profanity in the Finnish translation this sudden change just keeps throwing me off.
Top

methpring wrote: ↑Tue Oct 11, 2022 10:27 am I don't mostly like the word choises this new translator uses, but Gohee shouting "Perkele!" is so damn fitting!

Sounds kinda appropriate for a tipsy veteran hunter who has had back and forth with the same bear for almost a decade.
"We must remember what truly matters."
Top
Post Reply
66 posts

Return to “Hopeanuoli and other Finnish Publications”