This is amazing!!! Great job Digsu for finding! ^^
Wait for me; Terrex, Baghéera and Nokorde, when its my time I come

Forgot to include these in my previous post - here are the in-game profiles for Gin, Ben, and Smith. 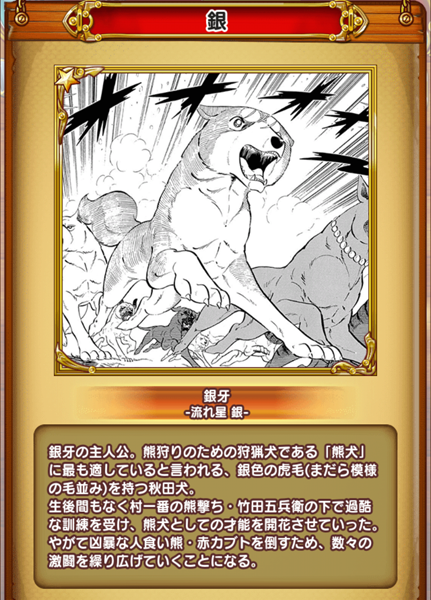 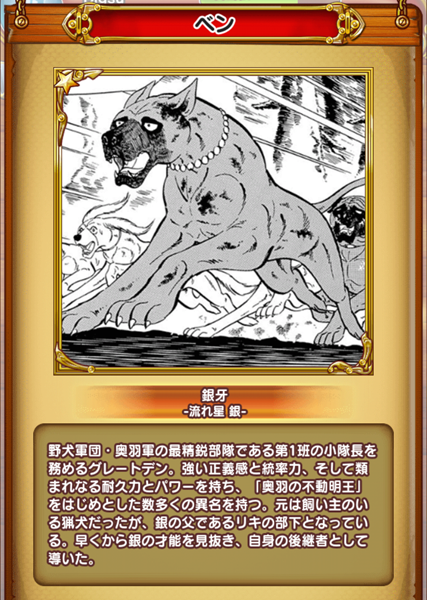 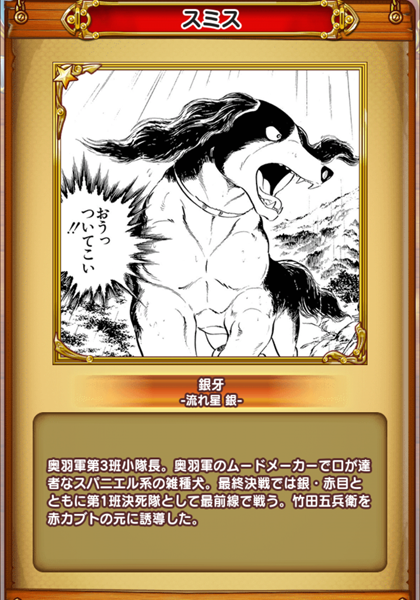 Gin is also one of the characters who can show up while the game loads. 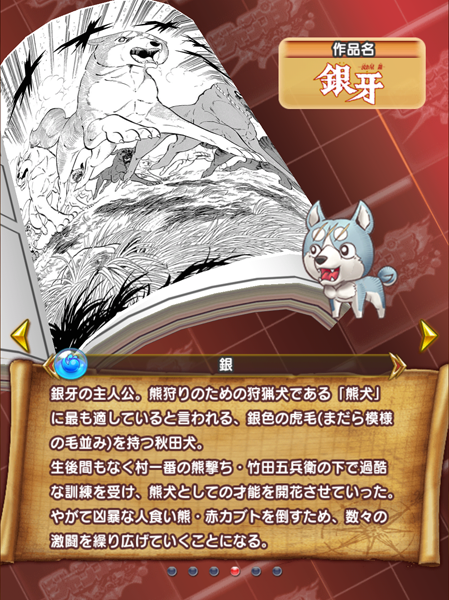 GOSH!!! Loving this so much!
Wait for me; Terrex, Baghéera and Nokorde, when its my time I come

Holy dsoijsijsdojodsjisdiosdijdsoidjs
Soooooo much. Thank you. Digsu
This made me so happy to see

I'm so happy for Ginga.

It's funny that Ben's special move is part of the arc that's suppose to be forgotten LOL;;;
I hope they release more characters! John...Kai bros...Cross... omg *-*

FDQ wrote: ↑
Wed Apr 11, 2018 4:02 pm
I tried getting the game to work on my phone, but I couldn't get past the startup screen. I tried with a Japanese VPN aswell, but no difference. Hopefully you have more success than me

I used Qooapp to download it and I'm currently playing through the tutorial, with no VPN in use. I have no idea what the trick is to get it working as a quick search shows a lot of people having the "stuck at start screen" issue

edit: The Koga dog appears in the tutorial! 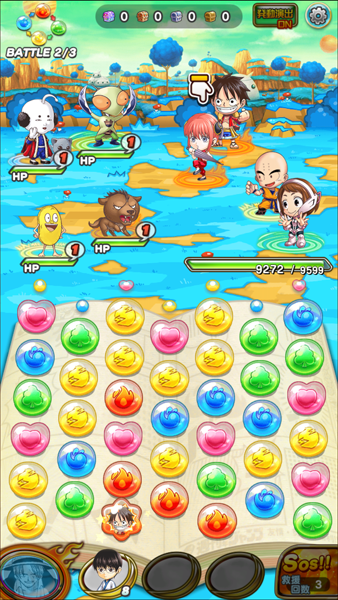 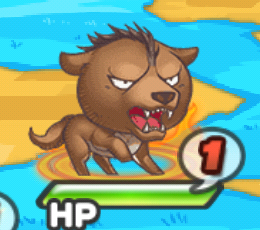 Thank you for telling me about Qooapp! It works from after downloading it

The game is oddly addictive

So far I've only managed to get Gin and Smith, but I've already upgraded Smith to 4 stars. I've only encountered Akame in as an enemy. And battled the Koga dog a few times so far. I can't wait to get to the Ginga island!!

Apparently Ben is one of the characters you can potentially see during the loading/login screen. I do wonder if Smith and Akame can also show up. 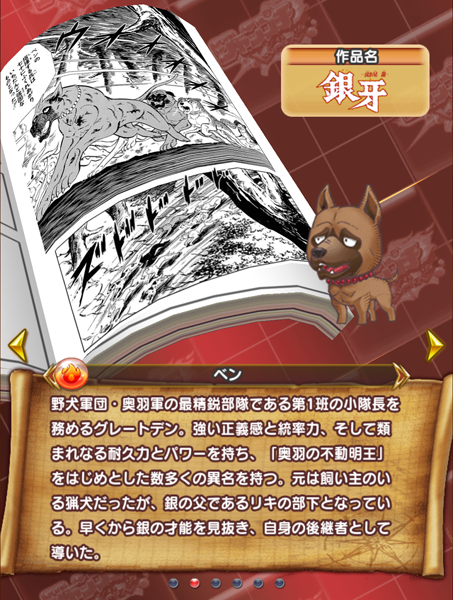 As an aside, I went and tried to directly pull the character graphics from the game files, but the image files have some sort of encryption/encoding/magical force field of imperviousness that make them unviewable. So unless someone out there cracks the encryption and dumps all the assets on the 'net (which is bound to happen sooner or later, because people on the Internet can and will crack anything), that's not an option. 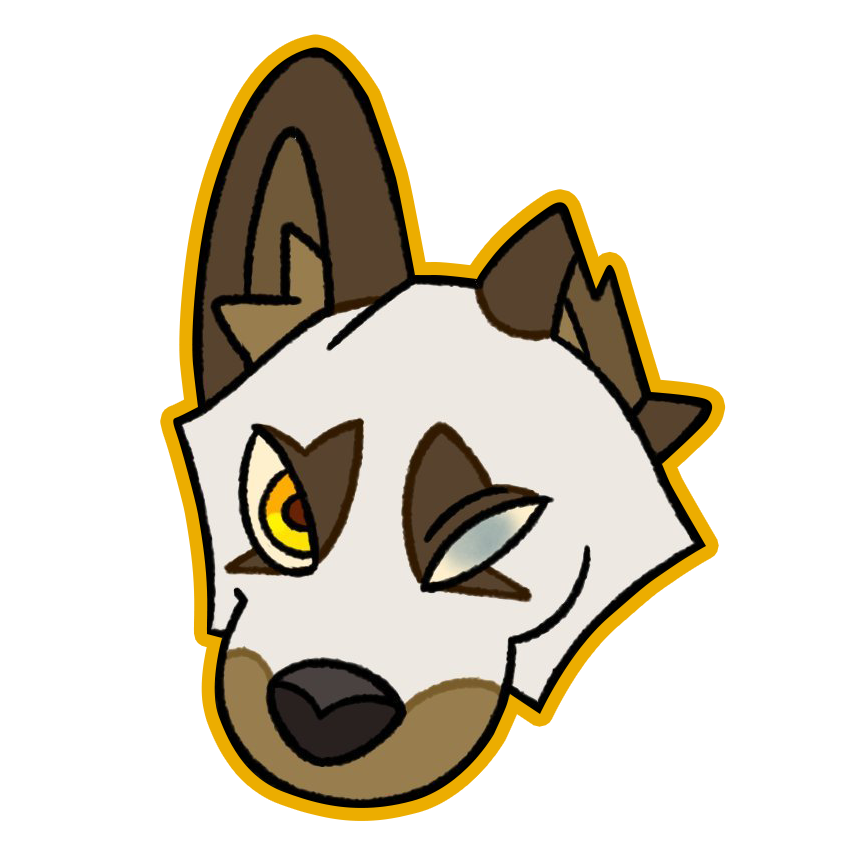 Is the game easy to figure out without being able to read Japanese?
Top

I'd say yes. The biggest issue I've had thus far is figuring out the support skills of each character, though you can always just try them out to see what they do. Since the game uses the general Google Play/App Store message boxes to finalize any transactions, there's no need to worry about accidentally spending money, either. (Interestingly, the game asks how old you are before you're able to buy anything for real money and imposes limits on the amount you can spend based on your answer - up to 5000 yen a month if you're under 15, 200000 yen if you're 15-19, and no limit if you're 20 or older. I assume this is to make sure little kids don't spend all their parents' money on shiny pixels, though I don't really understand what's keeping a kid from just lying about their age if they wanted to.)

Also, I managed to get Akame from a pack so here's some stuff. 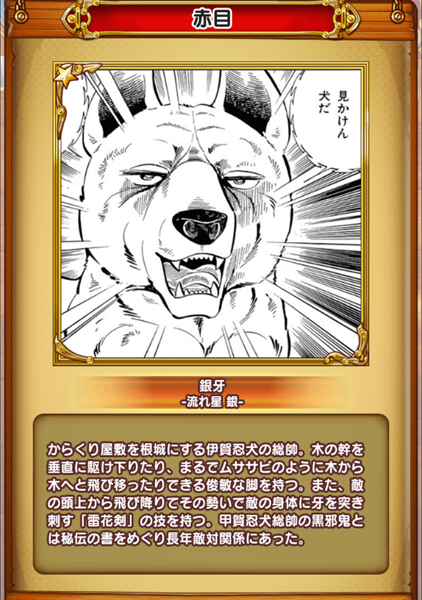 Bonus: a few group shots of an all-GNG party. 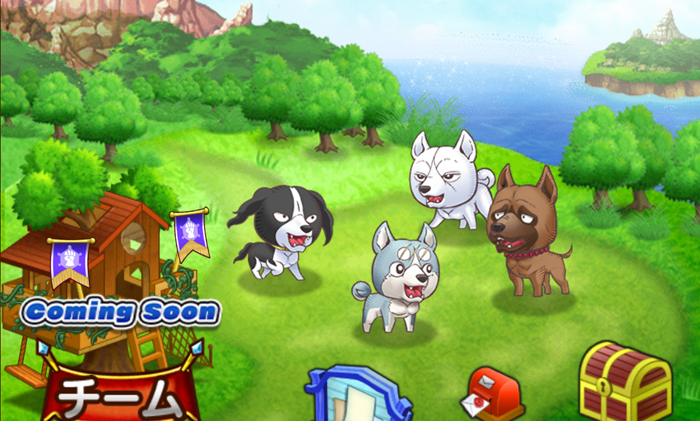 Banner made by Akame, thank you <3
Top

GOTTA LOVE AKAME HERE!!!
Btw, how can I get this game to play???
Wait for me; Terrex, Baghéera and Nokorde, when its my time I come

At the moment the simplest way is to download it through Qooapp. You need to have Qooapp on your device or it won't work, but the page will provide a download link for it if you try to download the game without the app.

I'd say it's pretty easy. The support buffs are *kinda* easy to figure out once you use them, since there will be a small image of the buff you have over your character. A fist with an arrow pointing upwards is increased damage and so on.

And the menues are easy enough. There's pretty much just 4 menus to remember and most have a picture that almost shows what it is.

I tried buying from the store, but then 6 yen price said 6 dkr once I got to the google store. Which means if I wanna buy for 500 yen (which is essentially 25 dkr) it ends up showing 500 dkr instead and I simply don't wanna take the chance in case it really IS 500 dkr it charges me

At the moment the simplest way is to download it through Qooapp. You need to have Qooapp on your device or it won't work, but the page will provide a download link for it if you try to download the game without the app.

How does the Qooapp look like? So I can download it before I try the APK? Or do I need APK for Qooapp as well?

Wait for me; Terrex, Baghéera and Nokorde, when its my time I come

Thanks to your posts, Digsu, my hubby helped me get the game onto our phone with an app called BearTunnel ^^ It works fine for me.
I got my Gin, but our free pulls weren't lucky at all ;;;
I'm currently holding off spending the free rubies and tickets they gave in hopes of saving it for when they add more c:<
There's no expiration on them right...? That...would really suck .-.

Okami wrote: ↑
Sat Apr 14, 2018 1:06 am
Thanks to your posts, Digsu, my hubby helped me get the game onto our phone with an app called BearTunnel ^^ It works fine for me.
I got my Gin, but our free pulls weren't lucky at all ;;;
I'm currently holding off spending the free rubies and tickets they gave in hopes of saving it for when they add more c:<
There's no expiration on them right...? That...would really suck .-.

I don't think there's an expiration on the rubies. However, you do get quite a lot just from completing the first few islands. I've accumulated over 4k rubies by now already in just a few days

I realized that tapping your party members in the main menu makes them say one of four quotes, so here are all the things the Ginga dogs say when poked. I attempted to translate them with Google Translate's help and I'm like 80% sure most of them came out okay, mostly because of how short they are.

I also cleaned up some of the game sprites we haven't got yet. 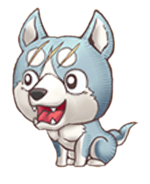 This is part of Gin's healing/victory animation. Unlike the other Ginga characters, Gin alternates between howling and just sitting there. Maybe he's still too small to howl continuously 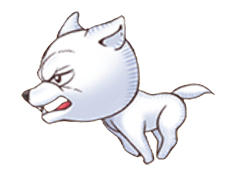 Happy sprites used when activating a support skill. Gin's is almost identical to his idle sprite so I couldn't be bothered to clean it up.

Idle and hurt sprites for the Koga dog enemy.

Man, those translations really did turn out nice! Thanks for sharing, I was really curious!

I did do a little editing to make the translations more readable and less weird, but Google Translate did most of the work.

Also a lot of the quotes appear to either be directly from GNG or paraphrasing quotes from GNG:

-both "I'm Gin!" and "I'm no 'runt'!" seem to be from Gin's battle against Kurotora, though the former could honestly come from a number of places.
-"Waiting until the time is ripe" is similar to what Ben tells Cross when forbidding her from fighting Madara too early.
-The "we're looking for true males" is basically what Ben tells Gin and John upon meeting them.
-"A leader needs righteousness" is what Ben says to Akame when deciding his successor as platoon leader.
-The "my hometown" quote seems to paraphrase Ben showing Koufu to the other dogs and saying he was born there.
-"The stronger the man, the more considerate he is to ladies" is what Smith says to Ben being concerned about Cross' fur being all wet.
-The quote about Smith "holding onto his life" is what he thinks after Gin saves him during Sniper's ambush.
-The "wild dogs have no table manners" thing seems to be a reference to him commenting that the Kai bros eat "like wild animals" during their introduction.
-Akame's important duty as an Iga ninja dog might be a reference to his plea for Ben to set him free, where he says he's responsible for the clan (or it might literally be what he's saying and Google Translate botched it up).edit: And looking at the raws, that's exactly what's happened here.
-The "I am indebted to Ben" one is a direct quote from him after he'd accidentally poisoned him.

Given the amount of art we've gotten from this game, should it get its own section in the gallery? Or should there just be a single topic for them all in the miscellaneous section?

I completely missed the fact that the boss fight on the first level of the GNG island begins with one of the Koga dogs doing the attack pose while stationary, so here's another sprite for the pile (normally, attack sprites are both in motion and mostly obscured by the attacking flashes, so trying to get a good screencap of them the normal way is freaking impossible).

Banners and avatar by me
Top
Post Reply
77 posts